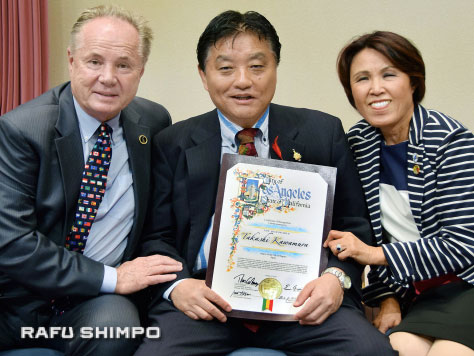 Former Los Angeles City Councilmember Tom LaBonge, who died Thursday at age 67, was an enthusiastic supporter of Little Tokyo and the sister-city programs, including the L.A.-Nagoya Sister City Affiliation. In 2008, he joined Teruko Weinberg of LANSCA in presenting a proclamation to Nagoya Mayor Takashi Kawamura.

Known as Mr. Los Angeles for his knowledge and love of the city, LaBonge represented the 4th Council District — which includes Koreatown, Mid-Wilshire, the Miracle Mile, Fairfax District and much of Hollywood, Silver Lake, Los Feliz and Griffith Park — from 2001 to 2015.