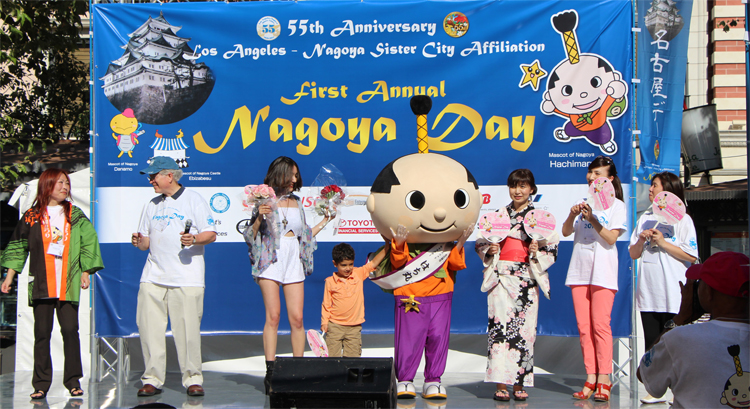 This presentation supplements the description of the “Nagoya Day 2019” event in the Sponsorship Brochure which is included in this website.

Sixty years ago, Los Angeles and Nagoya, Japan became sister cities as part of the people-to-people diplomacy movement initiated by President Eisenhower. Nagoya is Los Angeles’ first and oldest sister city. From that beginning in 1959, LANSCA volunteers have actively pursued cultural, educational, and civic ties with Nagoya. Student exchange, teacher exchange, art, and other cultural, educational, civic and business exchange programs have knit the two cities together over this long span of time. A detailed history of the sister city relationship can be found on the LANSCA website at https://lansca.org/about-lansca.

Nagoya is today the fourth most populous in Japan and the center of Aichi Prefecture which is the home of Japan’s manufacturing prowess, with industrial output exceeding the GDP of many countries. An Aichi company everyone knows is the Toyota Motor Corporation. Then there are the office products of Brother Industries, the automobile parts from NGK Spark Plugs, the MRJ regional jet from Mitsubishi Heavy Industries, the luxury tableware of Noritake, and rice wine vinegar and other food products made by Mizkan. All are Aichi companies with Nagoya and its port as hub. Nagoya is also known for its rich history. It was the home of the Shoguns whose forces of samurai warriors took control of Japan in the 17th Century, initiated the Tokugawa Era, and ruled the country for over 200 years, becoming the subject of popular films and literature. Nagoya is also known for its contemporary cultural events, such as hosting the annual World Cosplay Summit which attracts cosplay performers from around the world.

This year is the 60th Anniversary of the sister city program. Using that milestone event, LANSCA is presenting a “Nagoya Day” event on Saturday, October 26, 2019 at the Westfield shopping center in Century City, Los Angeles. The goals of the event are threefold:

(1) celebrate the 60th anniversary of the sister city relationship between Los Angeles and Nagoya.

The sixtieth anniversary is unique among anniversaries in Japan. Known in Japanese as kanreki (還暦), the 60th represents the completion of the entire cycle in the Zodiac calendar represented by twelve animals and five natural elements, at which point the cycle starts again and a second life begins. It has been a momentous occasion in traditional Japanese culture.

(2) introduce the sister city relationship to the people of Los Angeles.

Nagoya is LA’s oldest sister city, but many have never heard of it. LANSCA’s volunteers historically came from the Japanese-American community centered in Little Tokyo. While still an important component of LANSCA, that community has been changing. LANSCA wants to open its doors to the broader Los Angeles community so more people can participate in the citizen diplomacy movement.

(3) inform the people of Los Angeles about Nagoya, its culture and its companies as well as Central Japan.

Many Americans travelling to Japan visit Tokyo and Kyoto and rarely stop at the city in-between: Nagoya. Nagoya has its own culture, cuisine and history that are largely unknown to travelers to Japan. The Central Japan region accessed from Nagoya is also filled with attractions for tourists. LANSCA hopes that as more Angelinos visit Nagoya and Central Japan, more Angelinos will want to become involved in the sister city program with Nagoya.

In addition to tourism, LANSCA wants to introduce the Nagoya and Aichi culture of monozukuri, namely, making things or craftsmanship. The region is famous for its traditional and modern products and manufacturing skills. By promoting the monozukuri culture, LANSCA hopes to create stronger ties between businesses in the two sister cities.